Our open banking tracker for the first quarter of 2021 tells a complex but encouraging story.

When the U.K. made its formal departure from the European Union (‘Brexit’) at the end of 2020, it also withdrew from the European Economic Area (EEA) Agreement. This, among other things, resulted in changes to financial services ‘passporting’ arrangements, which allow third parties that are registered with a National Competent Authority in one country to provide services in another. Our tracker subsequently records a decline in the total number of third parties that are permitted to provide services in each country.

“It’s obviously far too early to understand the real impact, if any, of Brexit on open banking across Europe and in the U.K.,” says Jim Wadsworth, senior vice president for open banking at Mastercard. “The change in passporting arrangements is clearly material, but providers who want to continue to offer services in relevant markets will no doubt find ways to do so, for example through temporary extension of the passporting regime in the U.K. and a number of EEA countries, leveraging others’ licenses or by applying for their own additional licenses.”

“In the meantime, we have seen continued growth in open banking service usage by customers, for example with the U.K. reporting a rapid rise in the adoption of open banking-enabled payments. The data are encouraging.”

This quarter, we report on total third-party registrations in Europe recognising many of the mechanisms that govern open banking remain the same. However, we will continue to make note of how trends in the U.K. remain consistent or diverge. At 31 March 2021, the U.K. figures show resilience and continued strength.

Read a full summary of growth and progress in Open Banking for Q1 2021 below. 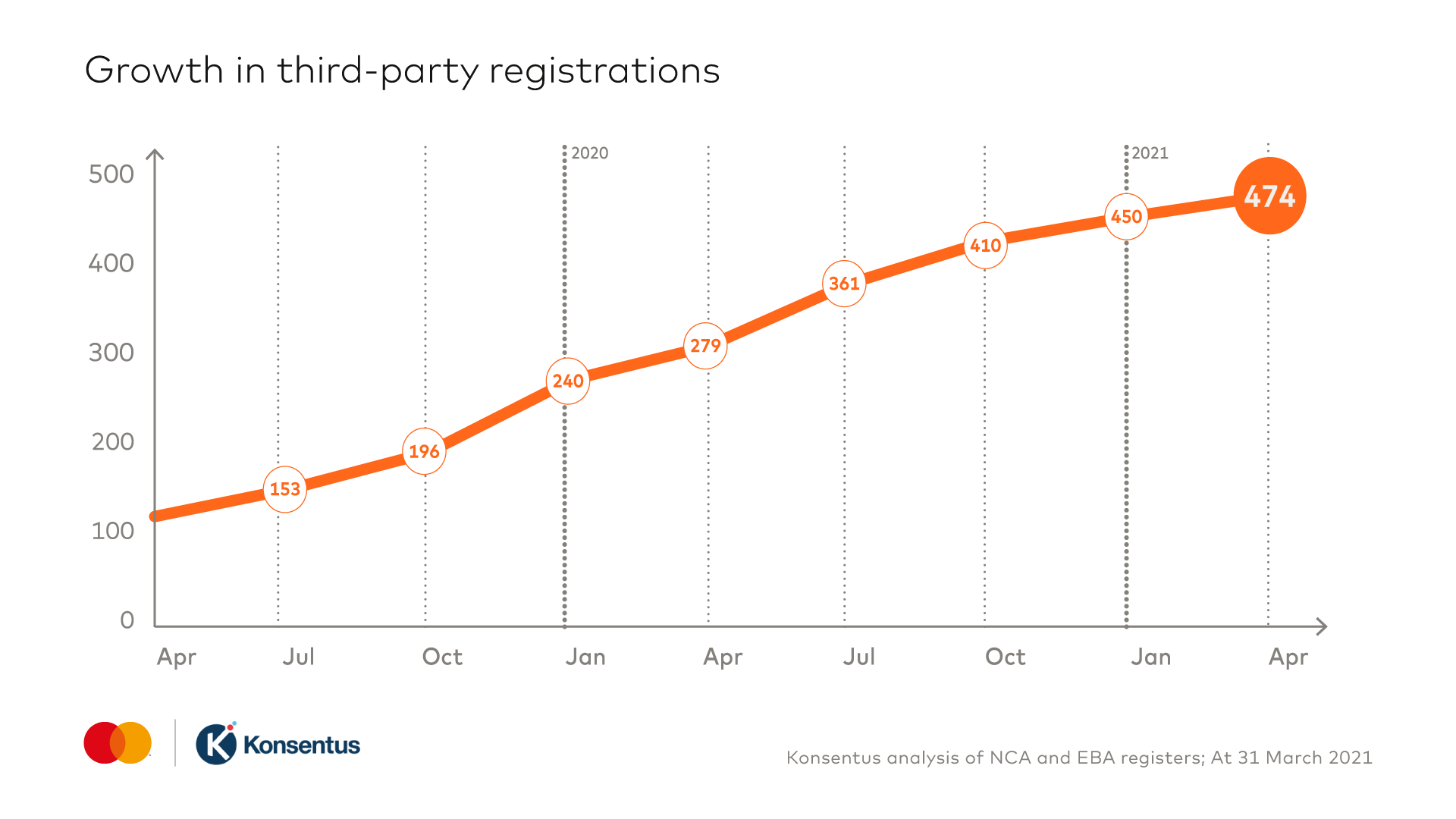 The rate of growth in third party registrations slowed to half that of the previous quarter. The increase was 7.6 percent in the EEA and 2.5 percent in the U.K., which averages at 5 percent growth across the region. We can likely attribute this to the impacts of Brexit and continued economic uncertainty as a result of the coronavirus pandemic.

Still, with 24 new registrations, the figures are encouraging. And we must bear in mind the seasonality of these data: a year ago, Q1 2020 recorded a slower rate of growth than previously before accelerating again in Q2. The rate of growth may rebound next quarter along with improved confidence among third-party providers.

Brexit has resulted in a reduction in the total number of third parties that are permitted to provide services under passporting arrangements from at least 75 in each country at the end of the previous quarter to as low as 43 (Iceland) at the end of March 2021. It should be noted, however, that these numbers had declined in the previous quarter — perhaps in anticipation of the uncertainty to come.

Many countries that remain in the European Economic Area recorded a reduction of around a third, but the U.K fared far better (-6.7%). This is likely because the country’s Financial Conduct Authority made provisions for third parties that declared their interest by the end of December 2020 to provide services in the U.K. under a Temporary Permissions Regime (TPR). TPR enables relevant EEA firms and funds that were passporting into the U.K. when the transition period ended to continue operating there until they have obtained a local regulatory license. 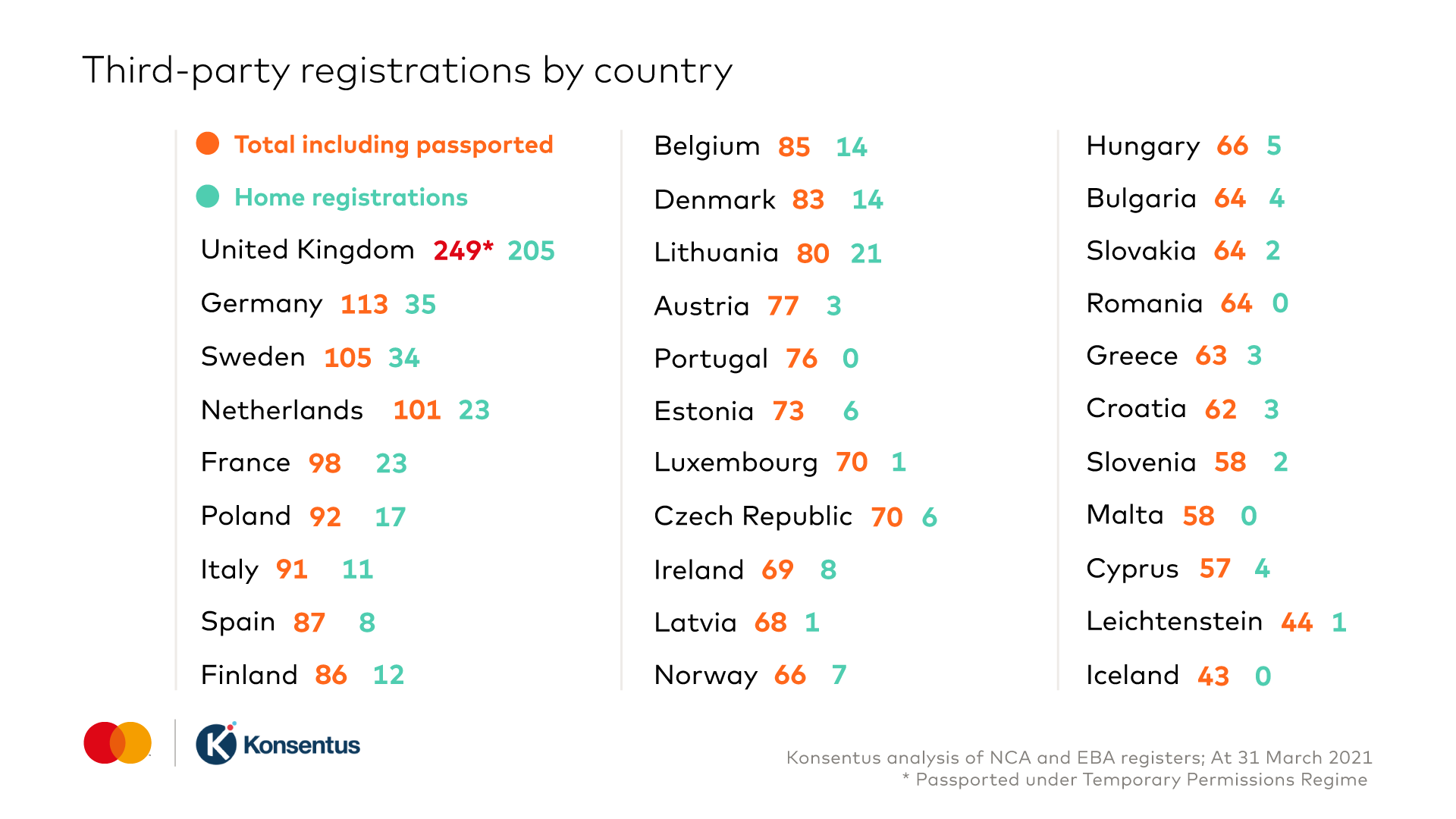 A third-party provider from the EEA that didn't register by the TPR deadline but would like to operate in the U.K. must now establish itself and apply for local registration with the FCA.

The EEA has not established a similar regime to allow U.K. regulated financial entities to continue passporting their services into the EEA. However, some EU member states have. Spain’s regulator, for example, is allowing U.K. financial entities to continue passporting in for six months. After that time, and elsewhere, U.K. third parties must apply for local registration in the EEA if they wish to provide services in the region.

There were five new registrations in the U.K. over the period. Proportionally, it equates to less than half the previous rate of increase, but the U.K. has led the pack by a far stretch since we started tracking. Given the country is more advanced in its domestic open banking initiative, it may be that the market is beginning to mature.

The U.K. has 44 third parties that are registered under the Temporary Permissions Regime

Germany and France, which have long ranked in the top four by home-regulated providers, recorded no new registrations in the quarter. France also suffered one of the largest declines in the number of third-party providers via passporting arrangements. Financial centres in both countries are considered comparable to London, but had not yet capitalised on Brexit uncertainty. 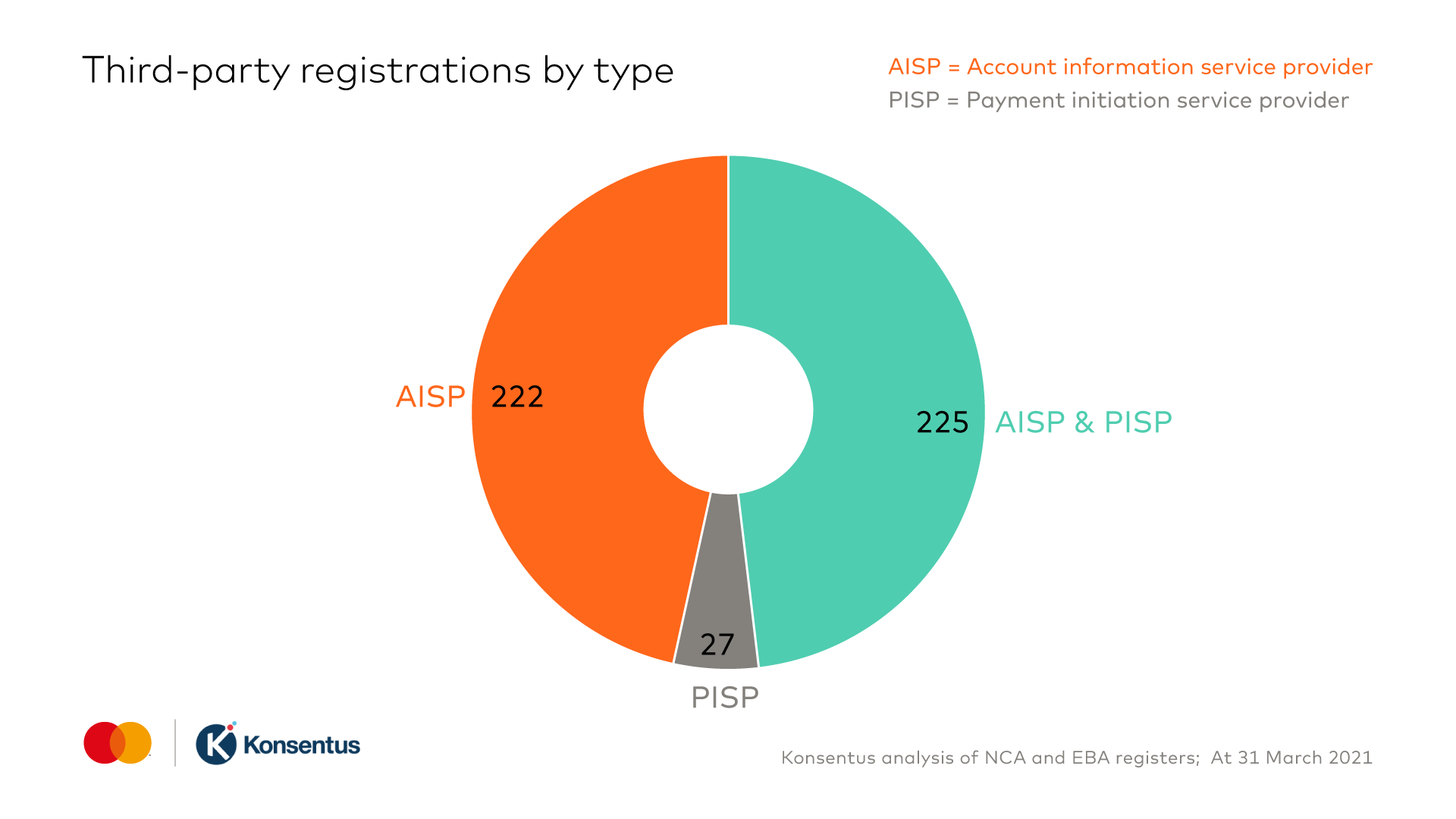 Of course, this data on third-party providers do not include credit institutions that are developing or already providing open banking-enabled solutions to consumers and businesses in Europe. The U.K.’s Open Banking Implementation Entity reported there were 81 account providers in the country at the end of February 2021, many of which are bringing payment initiation services to market.

In fact, more than one million open banking payments were processed in that short calendar month — a milestone made even more significant when we consider just 3.2 million were made throughout 2020. It indicates growing consumer preference for open banking payments as an alternative way to pay, with all likelihood the pandemic is helping to accelerate adoption.

So, despite all the disruption of the past few months, the U.K. continues to lead the open banking ecosystem within Europe. Time will tell whether other markets can close the gap.