In the second quarter of 2021, open banking in Europe continued to grow at a steady pace. The initial disruption wrought by the UK’s formal departure from the EU appears to have settled, with many third parties continuing to provide services in the UK under the Temporary Permissions Regime (TPR).

“The numbers of third party providers are mostly steady this quarter as the fall-out from Brexit begins to settle,” says Jim Wadsworth, senior vice president for open banking at Mastercard.

Read a full summary of growth and progress in Open Banking for Q2 2021 below.

Twenty-three new third party providers were registered in the period overall, of which five were in the U.K. 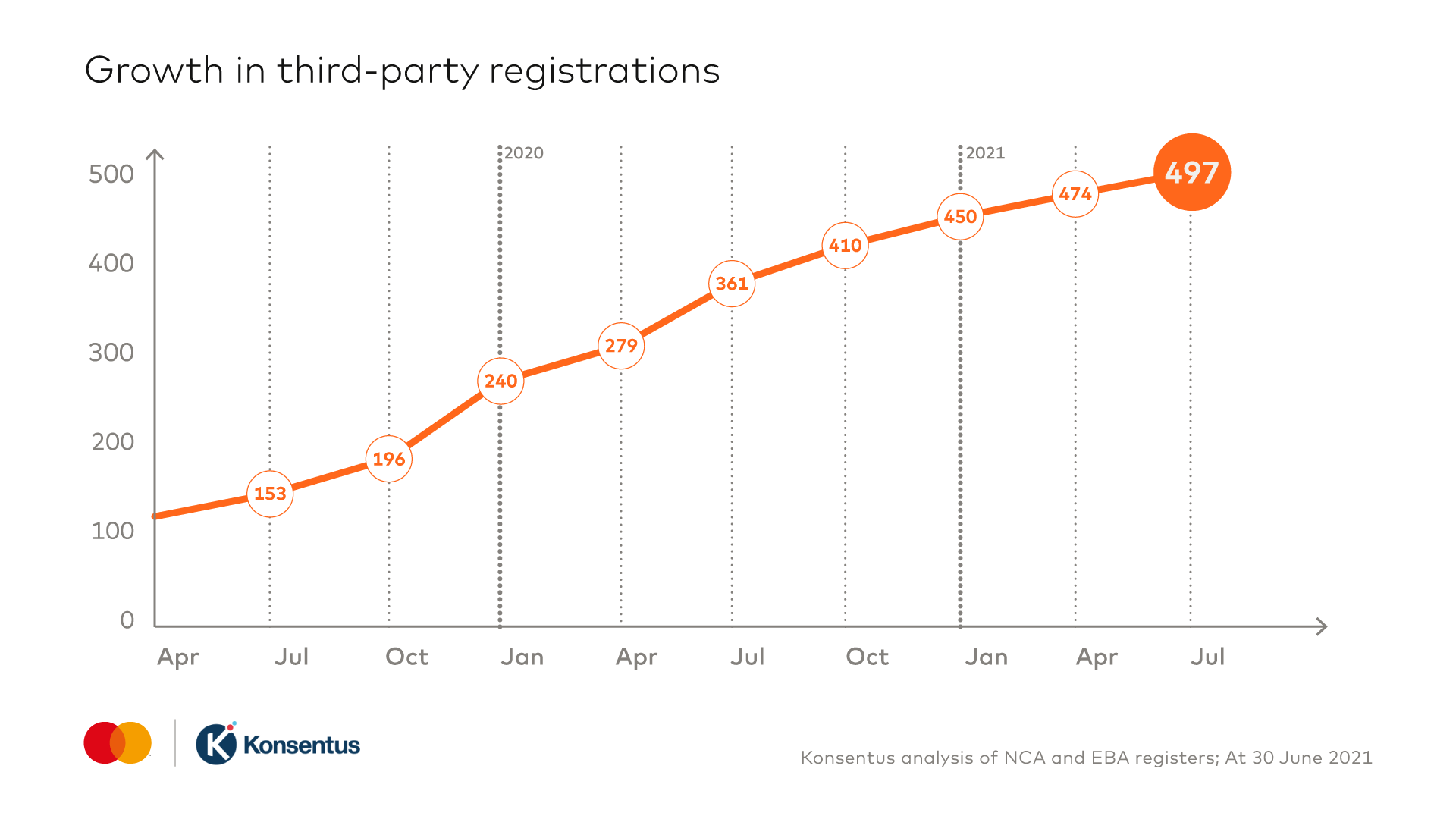 The rate of growth in third party registrations was equal to that of the previous quarter. The increase was 6.7 percent in the EEA and 2.4 percent in the U.K., which averages at 5 percent growth across the region. It represents a 38 percent increase year-on-year.

Old news by now, the U.K. continued to top the table of home-registered third parties and growth by number.

There were three new registrations in Poland, while Germany and Sweden recorded increases of two each to maintain their positions — now seemingly safe — in second and third places respectively. France, where there were also two new third parties, shared fourth with the Netherlands.

Iceland, Portugal and Malta remain the only countries with no home registered third party providers. Romania, which has long been a member of that pack, now has one home registration. 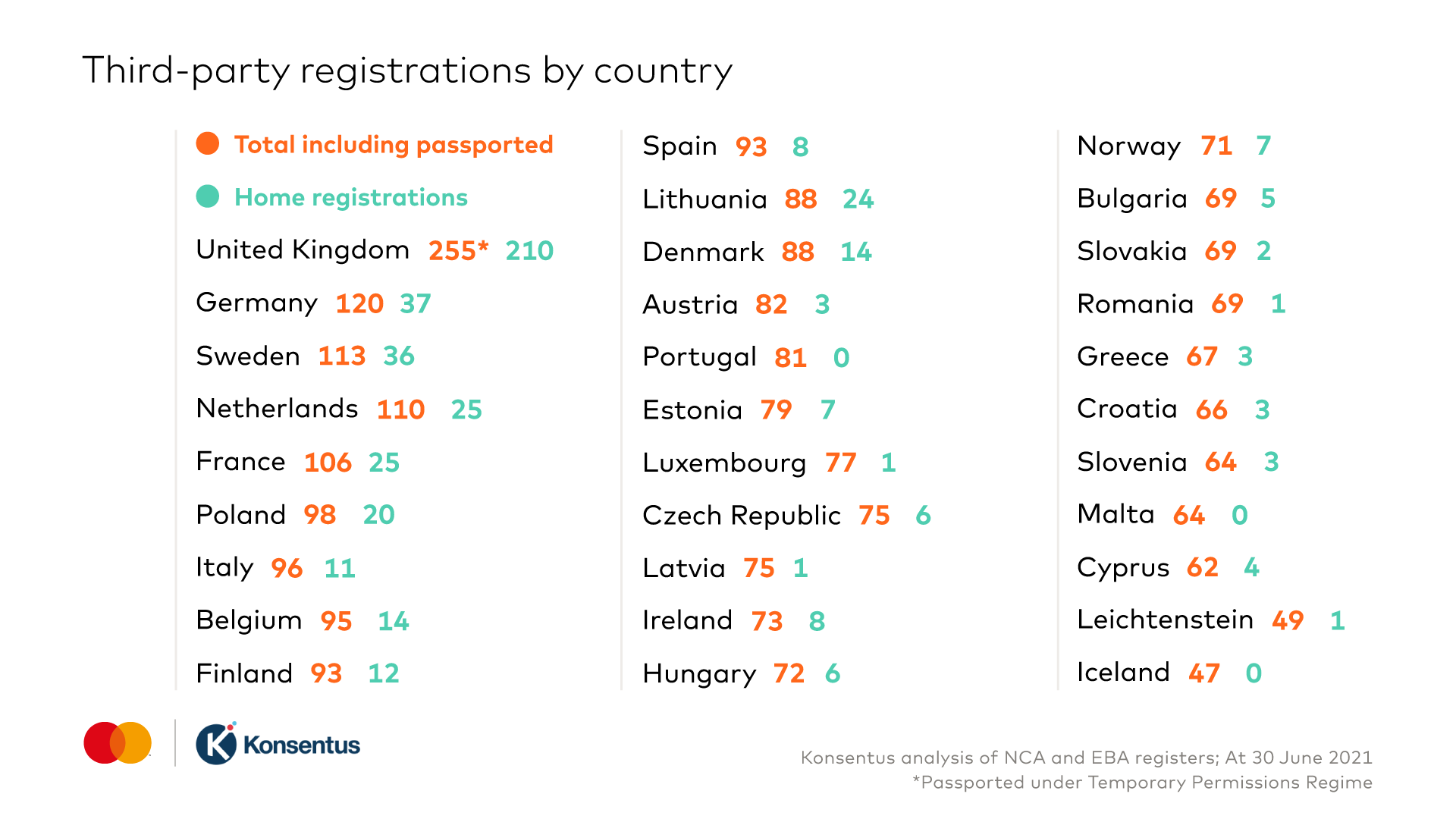 At 30 June 2021, there were 45 third-parties permitted to provide services in the U.K. under the TPR, bringing the U.K. total to 255. It’s not too far off the 267 we recorded at the end of last year, before the country’s formal departure from the EU triggered a decline.

Six months since Brexit, the number of third parties that are permitted to provide services elsewhere in the region had yet to recover so well. For example, at 31 December 2020 lowest ranking (by total including passporting) Liechtenstein was host to 75 third parties. Last quarter, while the country had climbed one spot up the table, our tracker counts only 49.

This is largely because the EEA has not established a regime to allow U.K. regulated financial entities to continue passporting their services into EU countries. Generally, U.K. third parties must apply for local registration in the EEA if they wish to provide services in the region.

Numbers in other countries, such as the Netherlands, Italy and Spain (which did make allowances for U.K.-registered third parties to provide services in the country, albeit temporarily) had risen better. They had the highest number of passporting third parties with 85 each, but totals weren’t yet back to where they peaked. 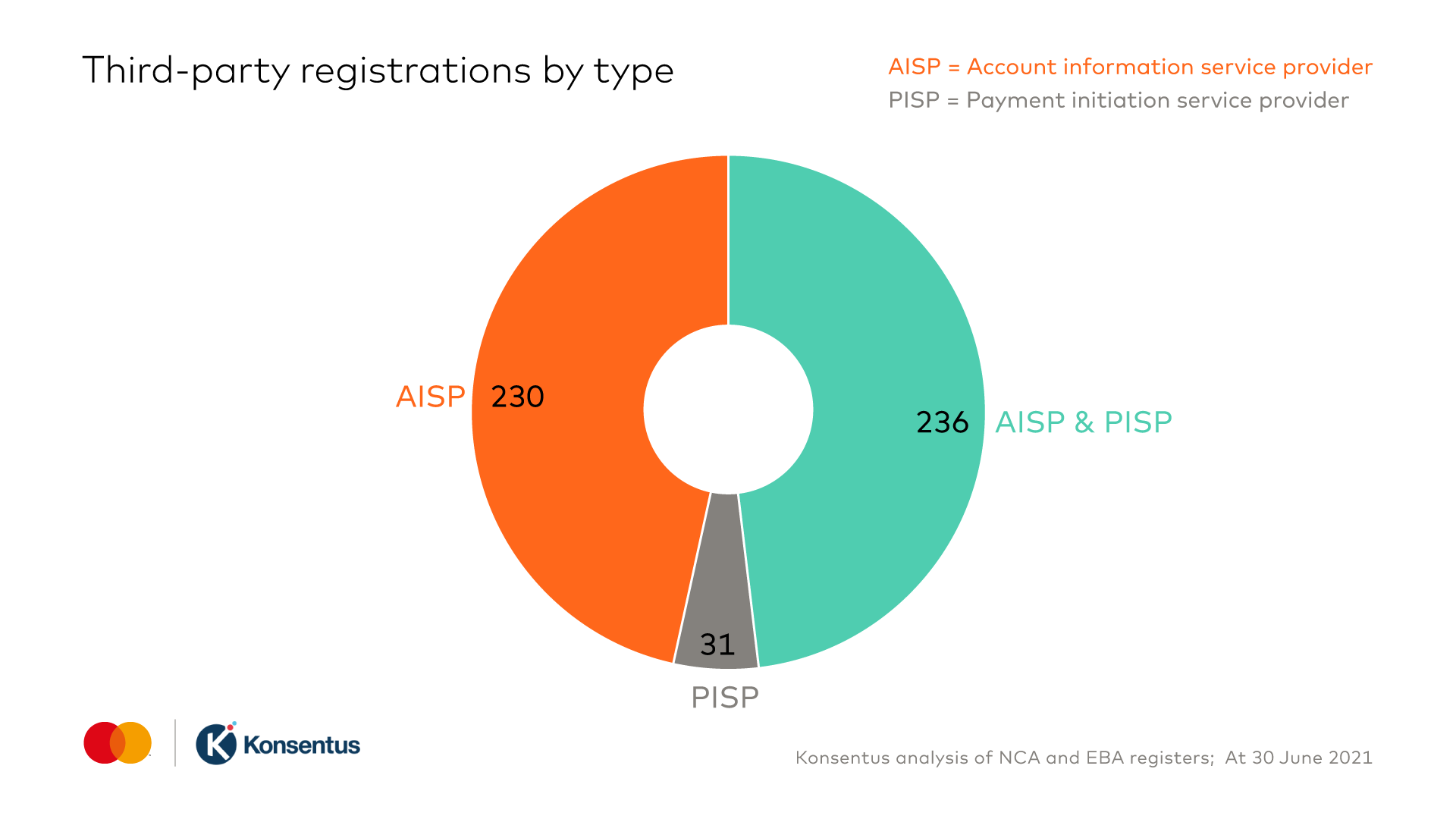 On the home front this month, we were delighted to announce a partnership with Lloyds Bank Commercial Banking to deliver a new Open Banking payment solution to Lloyds Bank’s business clients in the UK. The solution – which is compatible with most retail bank accounts – lets consumers make payments on an organisation’s website directly from their bank account without having to enter any payment details, improving speed and security while providing them with greater payment choice.

Finally, this quarter’s tracker complements the findings from Mastercard’s Open Banking Readiness Index, which provides insight into how ten European countries are preparing the move towards a fully realised open banking environment.