In the third quarter of 2021, open banking in Europe continued to grow. The total number of third-party providers at the end of September was 518, an overall increase of 21 (4.2%).  Notably, passporting numbers showed a rapid uptick over last quarter. On average, each EEA country added 9 more passported third-party providers, compared with 5 in the second quarter.

In Q4 2020, we remarked that Lithuania was the fastest growing fintech hub in Europe outside of the UK.  This quarter Lithuania is leapfrogging up the table again, with an increasing number of third-party providers establishing themselves there. “Since the U.K.’s exit from the EEA, and in the absence of an agreement on financial services cooperation between the U.K. and EU, Lithuania is proving to be a strong hub for third-parties formerly based in the U.K.,” says Jim Wadsworth, senior vice president for open banking at Mastercard. Several third-party providers have migrated their customers to Lithuania-based companies in order to passport licensed activities into other countries.

Read a full summary of growth and progress in Open Banking for Q3 2021 below.

Following our pattern, we will report on total third-party registrations in Europe, showing consolidated figures and where appropriate, breaking out the UK and the EEA. At 30 September 2021, the total number of third-party providers that were registered with a National Competent Authority to provide open banking services in Europe was 518, 216 were in the UK and 302 in the EEA. 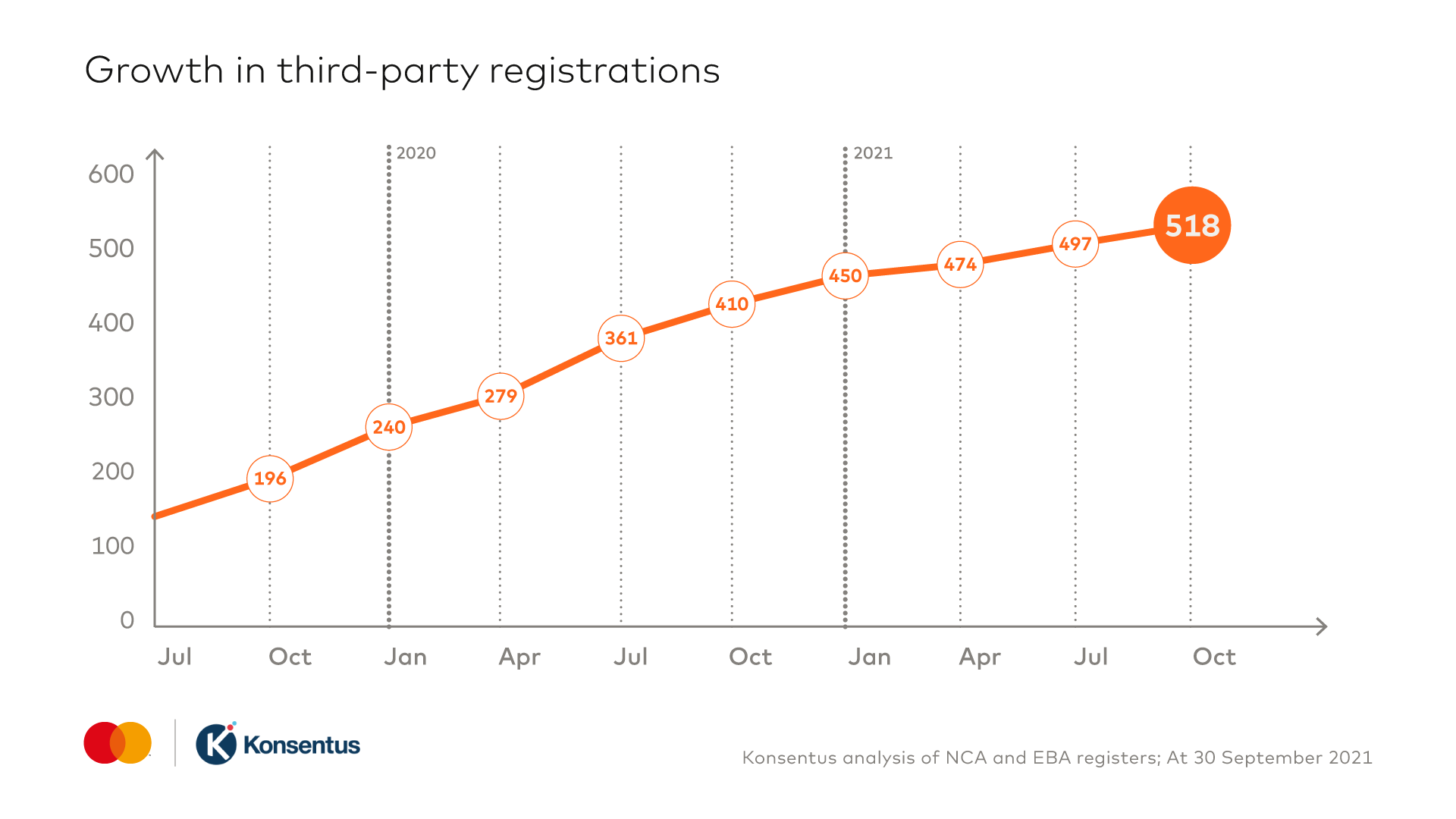 The U.K. continues to lead in growth, despite losing four third-parties. Their gain of ten easily outpaced all other countries. Also, as of September 30, 2021, 43 third-parties were allowed to provide services under the Temporary Permissions Regime in the U.K., as opposed to 45 on June 30, 2021.

12 countries increased their home third-party providers this quarter. While the U.K. increased its grip on first place, Germany and Sweden remain unchanged at second and third, respectively. France gained two third-parties to stay just ahead of fast-rising Lithuania and keep fourth spot with 27.

The number of countries with over 100 third-party providers (home and passported or registered under the Temporary Permissions Regime) has doubled since the last quarter and now is 10 countries: Belgium, Finland, France, Germany, Italy, Netherlands, Poland, Spain, Sweden, and the U.K. 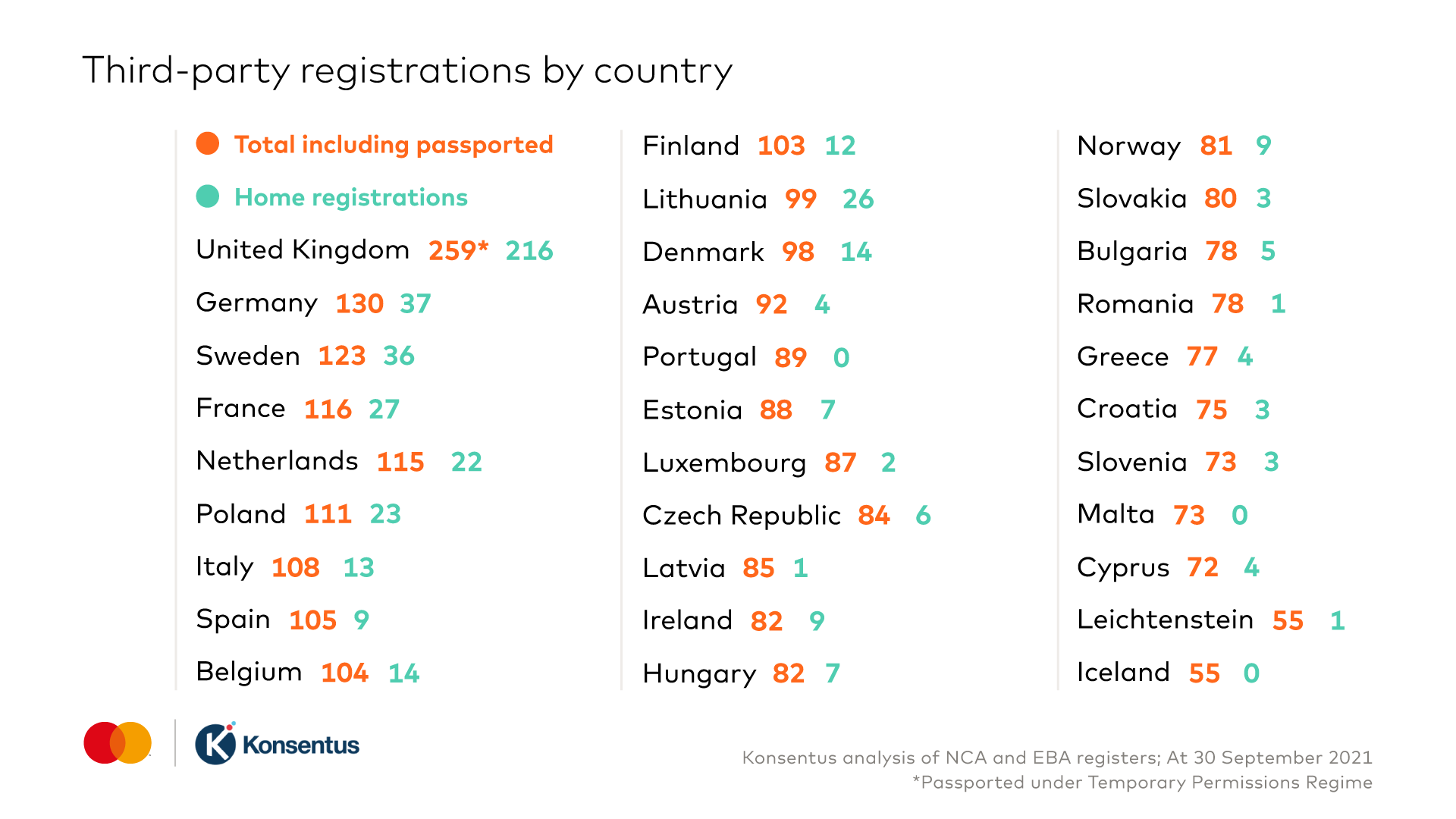 Meanwhile, the EEA has yet to establish a regime to clarify rules for passporting so that U.K. financial firms can conduct business in Europe. This explains in part the growing number of registrations of U.K.-based firms with Lithuania’s National Competent Authority, to give them access to passport through the EEA.

From the end of last quarter, there has been a significant increase (16) in the number of third-party providers which are authorised to provide AISP and PISP services.

The type of institution registering to operate as a third-party remains consistent. Electronic money institutions (EMIs) make up roughly 14% of all third-parties. 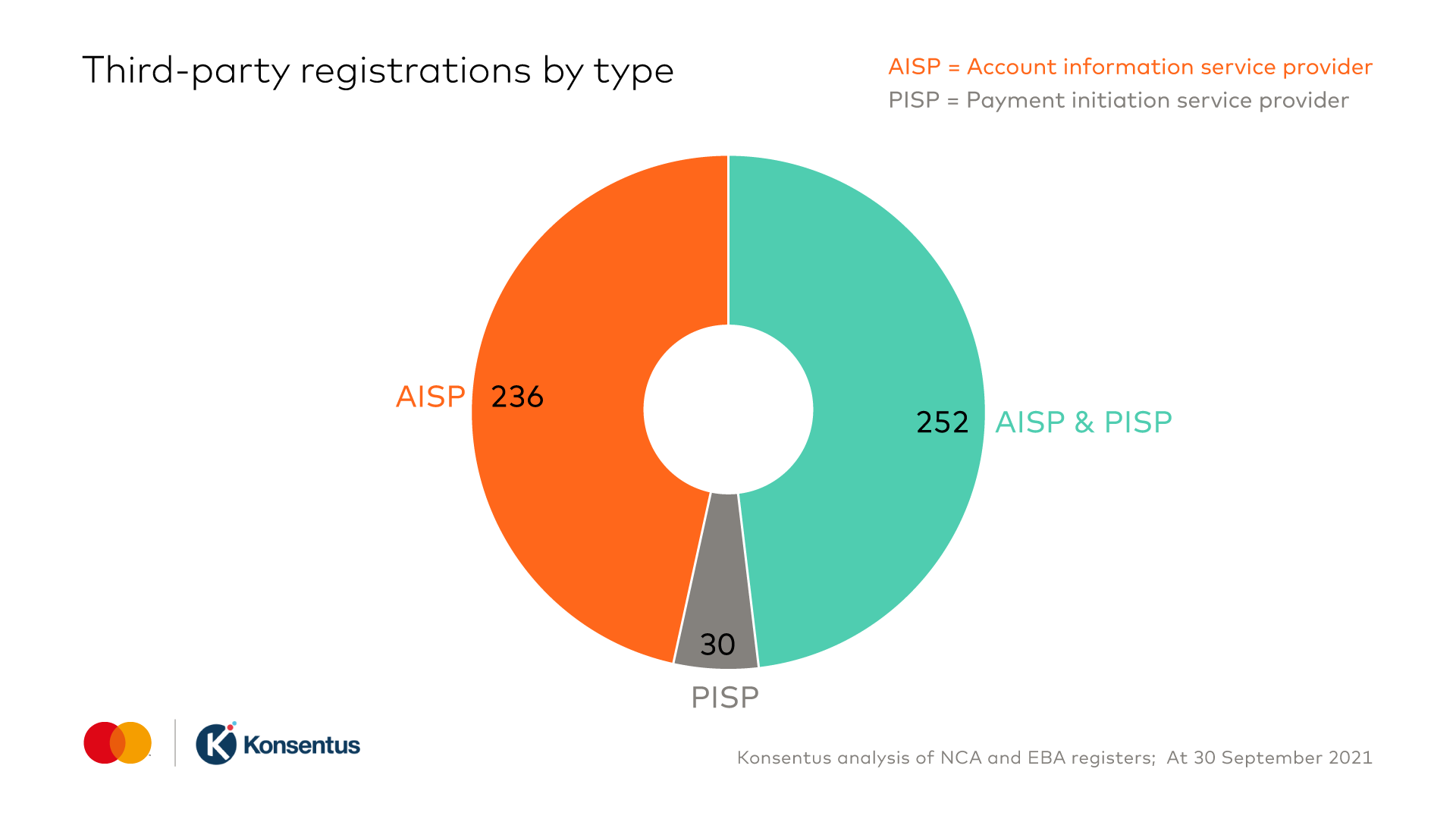 Mastercard has officially completed its acquisition of Aiia, a leading European open banking technology provider. Aiia offers a direct connection to banks through a single API, allowing its customers to develop and launch new digital solutions.

In U.K. news, Tesco Bank’s Pay by Bank service, enabled by Mastercard Open Banking Connect, has passed one million transactions since its September 2020 launch. The Pay by Bank integration with Tesco’s online and mobile apps means that customers can make immediate credit card payments directly from their bank accounts, with the ability to view account balances beforehand. Pay by Bank is also built into Tesco Clubcard Pay+, which gives consumers a new way to pay, save and pick up Clubcard points.