More than three years since it launched in the UK, and over a year since PSD2 came into effect in Europe, open banking has played a significant role in stimulating innovation in financial services. The phenomenon continues to grow around the world.

Open banking brings myriad benefits. Where it is truly coming into its own, particularly in the current climate, is helping to widen access to financial services, most notably credit. Mastercard’s acquisition of Finicity enhances our technology and capabilities to help lenders streamline their credit decisioning processes and better assess an applicant’s eligibility by leveraging a more holistic data set. This supports financially vulnerable consumers and small businesses who have traditionally been underserved by the financial sector, with fantastic potential to aid their recovery from the pandemic.

At Mastercard — and Finicity — we will continue to support all participants in the open banking ecosystem to enable a vibrant and competitive financial services landscape as it continues to evolve.

Our European Open Banking tracker is brought to you in collaboration with Konsentus, the software as a service company in which Mastercard is invested.

Read a full summary of growth and progress in Open Banking for Q4 2020 below.

At the end of September 2020, we reported 410 third-party registrations across Europe — an increase of 13.6 percent on the previous quarter. On 31 December 2020, a total 450 third parties had registered with a European National Competent Authority representing a 10 percent increase — the slowest quarterly rate of growth since we started tracking.  It's not yet clear whether this is an early sign of markets maturing, or just a one-off. We will monitor developments closely. 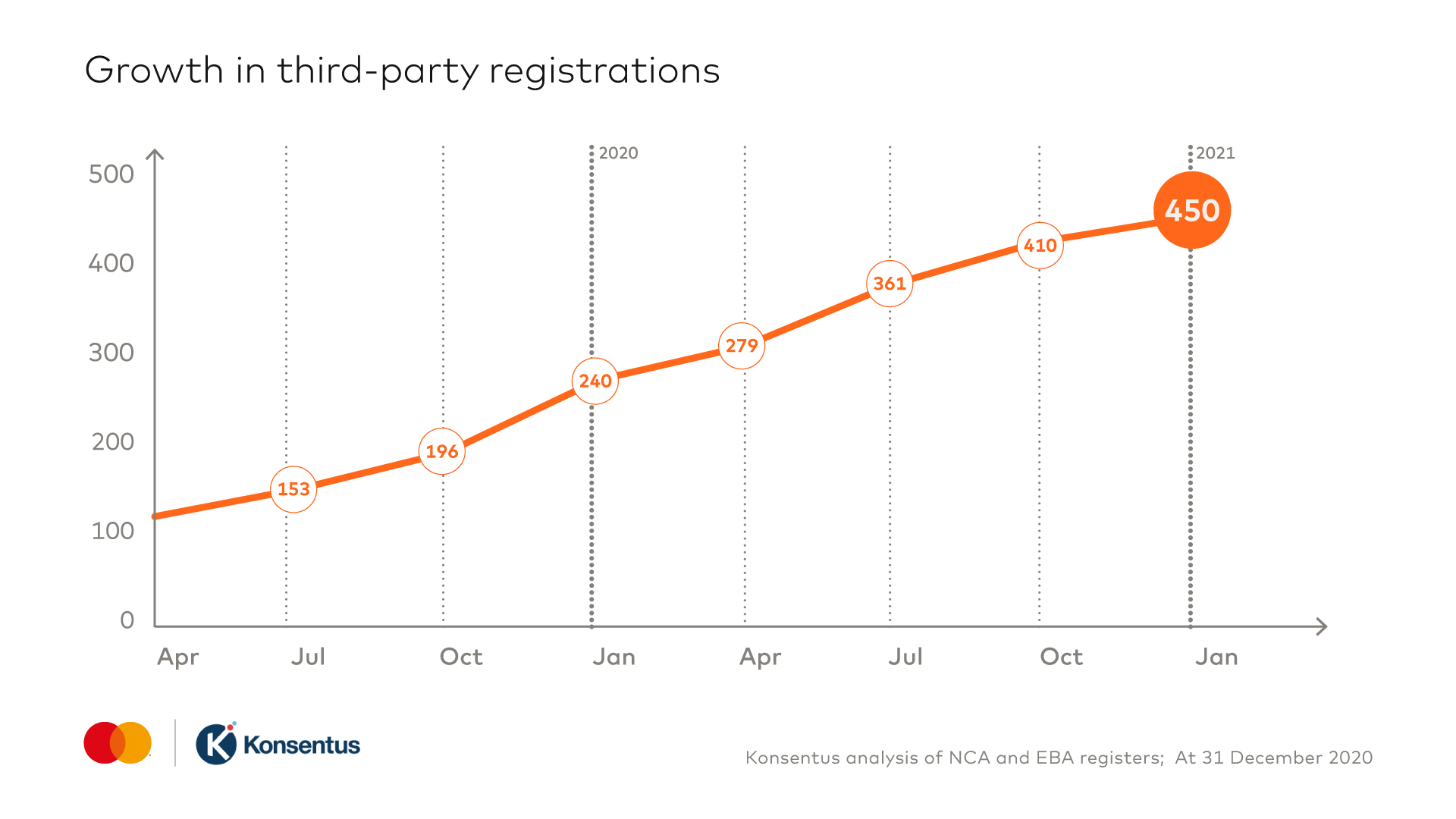 The UK continues to lead the charge in open banking. At 31 December 2020, a total of 267 third parties are licensed to operate in the UK, of which 200 (or 59.3%) are registered with the UK’s Financial Conduct Authority. New third parties registered at home in the UK last quarter accounted for more than a quarter of all new registrations (+11).

The next largest increase is in Lithuania, where 7 new additions last quarter have elevated it to fifth for home registrations (21). Lithuania’s regulator plays a positive role in promoting competition and innovation in the country’s fintech ecosystem, and the expertise of the country’s developers are contributing to make it the fastest growing fintech hub in Europe outside the UK. 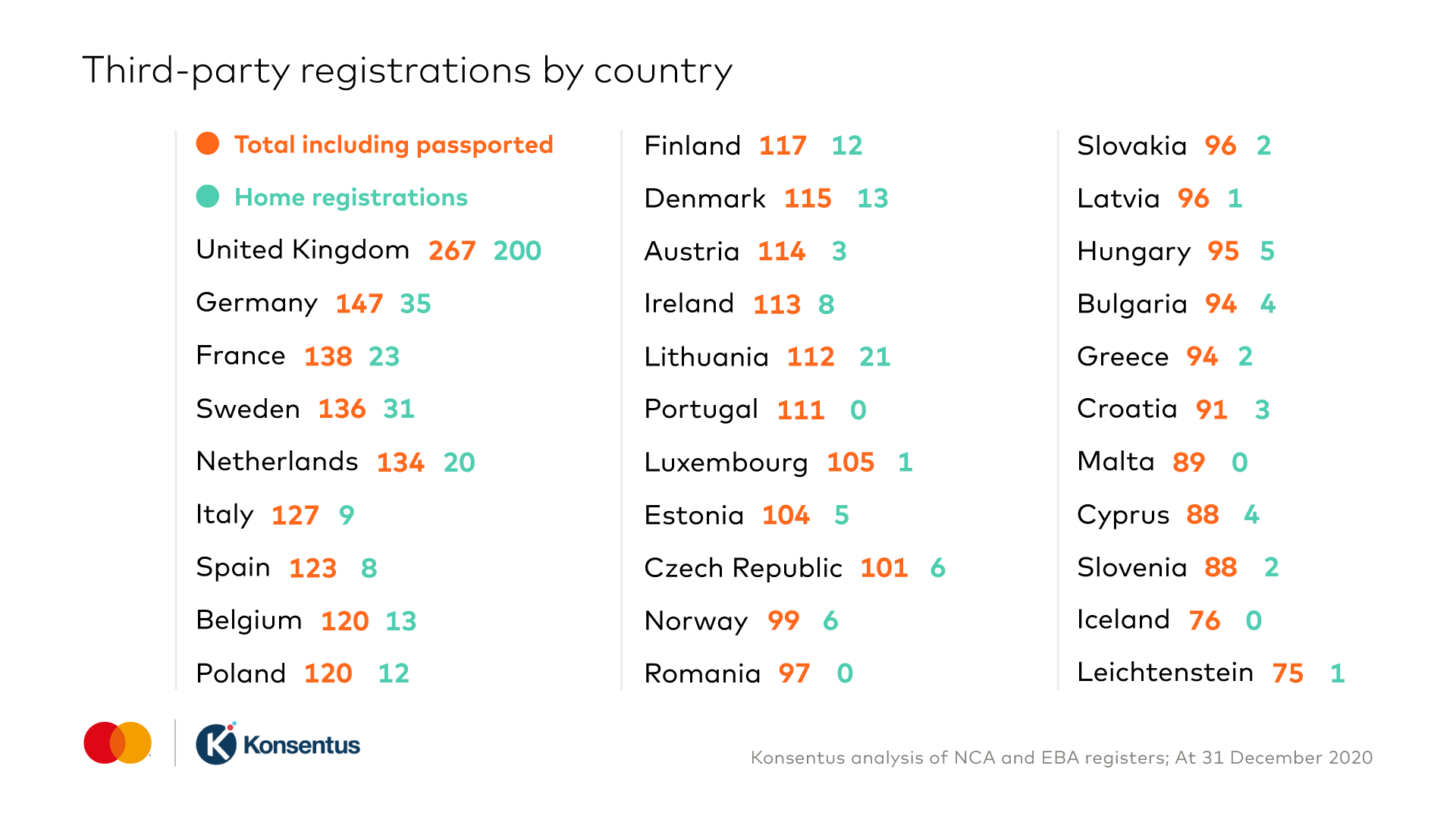 Sweden (+5) and France (+4) recorded modest increases in home registrations to retain their positions in the top four countries overall, but this isn’t a universal trend. The rate of increase in other mature markets has slowed and, in one case, reversed: 1 fewer third parties were registered with Germany’s regulator at the end of Q4 than the previous quarter. Meanwhile, Portugal, Romania, Iceland and Malta still have no home registrations. We expect this is a result of Brexit-related considerations, with new providers awaiting clarity from UK and EU governments at the new year.

Reported passporting numbers for Q4 are lower than Q3: while all markets had at least 85 registered third parties through European passporting rules after September 2020, they had 75 at the end of the year. This is due to a re-classification of third-party registration data towards the end of 2020 by the Dutch national competent authority and does not reflect an actual decline in the number of providers. 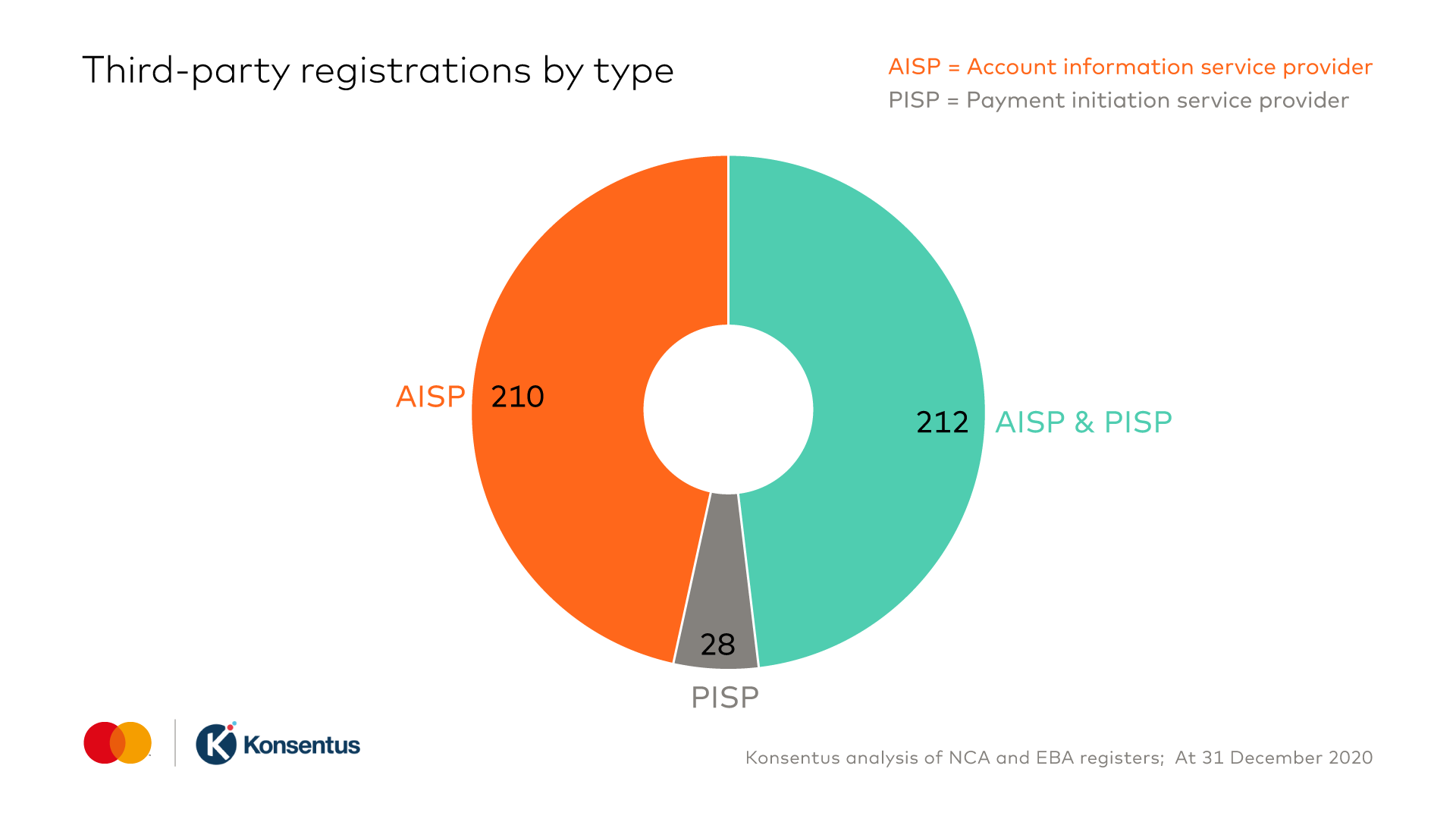 These proportions are consistent with those we’ve reported throughout 2020, and chime with Mastercard research among consumers and small business that shows highest demand for account information services that aggregate financial information or help people budget more effectively. Overall, 70 percent of consumers and small business owners we asked said they would use an open banking-enabled service to manage their finances.

240 registered third-party providers are themselves payment institutions (non-banks), 145 are registered account information service providers and 65 are e-money institutions. The fact that more than two thirds (305) of 450 licensed entities are one way or another interested in payments further suggests that provision of payment initiation services is likely to grow over the coming months and years.

Open banking around the world

The UK’s Open Banking Implementation Entity reports that a total 102 regulated entities had at least one proposition live with customers last year. More than 2.5 million UK consumers and businesses now use open banking-enabled products to manage their finances, access credit and make payments, with new active users increasing by hundreds of thousands every month. Total API call volume increased from 66.8 million in 2018 to nearly 6 billion in 2020 — an exponential increase.

Elsewhere around the world, we’re seeing a mix of approaches that all suggest open banking is set to become a globally ubiquitous phenomenon. For example, in Australia, the Consumer Data Right Act became law in July 2020, while in Singapore, the Monetary Authority of Singapore (MAS) recently published an ‘API Playbook’ with the hope of encouraging banks to open their services and systems.

We’re seeing a mix of approaches that all suggest open banking is set to become a globally ubiquitous phenomenon.

In November 2020, the South African Reserve Bank (SARB) issued a Consultation Paper on open-banking activities in the national payments system. The Paper observes the benefits of the implementation of APIs; however, SARB sees an ongoing role of screen scraping, which is already widely used in South Africa, in open banking implementation.

In January 2021, Saudi Arabian Central Bank (SAMA) issued a policy paper on open banking, which articulates the main objectives of implementing open banking in the Kingdom and its positive effects on the financial sector. In the policy, SAMA highlights that the initiative will enhance trust in both customers and market participants including banks, fintechs, and other financial players, adding that all these stakeholders have a pivotal role to play in the journey towards innovation and financial inclusion. To learn how the vision for open banking in the Arab world is redefining what’s possible across the globe, download our white paper, which is co-authored by the MFTA (MENA Fintech Association) Open Banking Working Group and the Arab Monetary Fund: Open Banking: A Vision from the Arab World.

And in Brazil, a permanent governance body set up the Central Bank (BCB) and the National Monetary Council is due to define its criteria for sharing and standardisation of product data and service channels. Financial and payment institutions are required to implement necessary mechanisms for sharing payment initiation services by August 2021, and for the sharing of other product and services data by December 2021. We look forward to supporting our customers in the Brazilian market as they navigate the open banking ecosystem’s growth.

In total, 36 countries and the EU are now home to either regulatory-driven or industry-led open banking initiatives. We encourage further developments via Finicity in countries such as the US and around the world. Mastercard together with our customers and industry partners, will drive towards a future where individuals and small businesses are in control of their finances and able to use their own bank account data for their own benefit.