Real-time payments have come a long way over the last half dozen years or so. When our partner BCS went live in Singapore with the Vocalink-built FAST real-time payments system in 2014, there were just 18 other equivalent systems around the world. Fast forward to 2020 and our internal tracker counts 49 live global real-time payments systems covering 58 different countries and territories. These markets account for the equivalent to over 89 percent of global GDP.  This drive towards payments modernisation is also evident by the fact that almost two thirds of these markets have access to a real-time system based on the ISO 20022 standards supporting improved data capabilities, reduced barriers to interoperability and more efficient processing.

Defining a real-time system is easy right? The clue is in the name. Alas, if only it was that simple. Even if we accept the view that a payment taking between 5 and 30 seconds is close enough to real-time to be acceptable, and putting aside the supposed differences in definition between real-time and instant payments, the breadth of payments systems and services out there describing themselves as real-time is quite mind boggling. The general consensus is that a real-time or instant payment must have near real-time posting of funds to the payee’s account (typically within 10 seconds), 24/7 operation, and that once initiated, the payment is irrevocable. The latter is especially important because it creates certainty around the transaction.

In building our tracker we have taken a relatively liberal approach, including some systems for example that do not operate 24/7 (although most of these systems are planning moves to 24/7). In so doing we have defined three types. 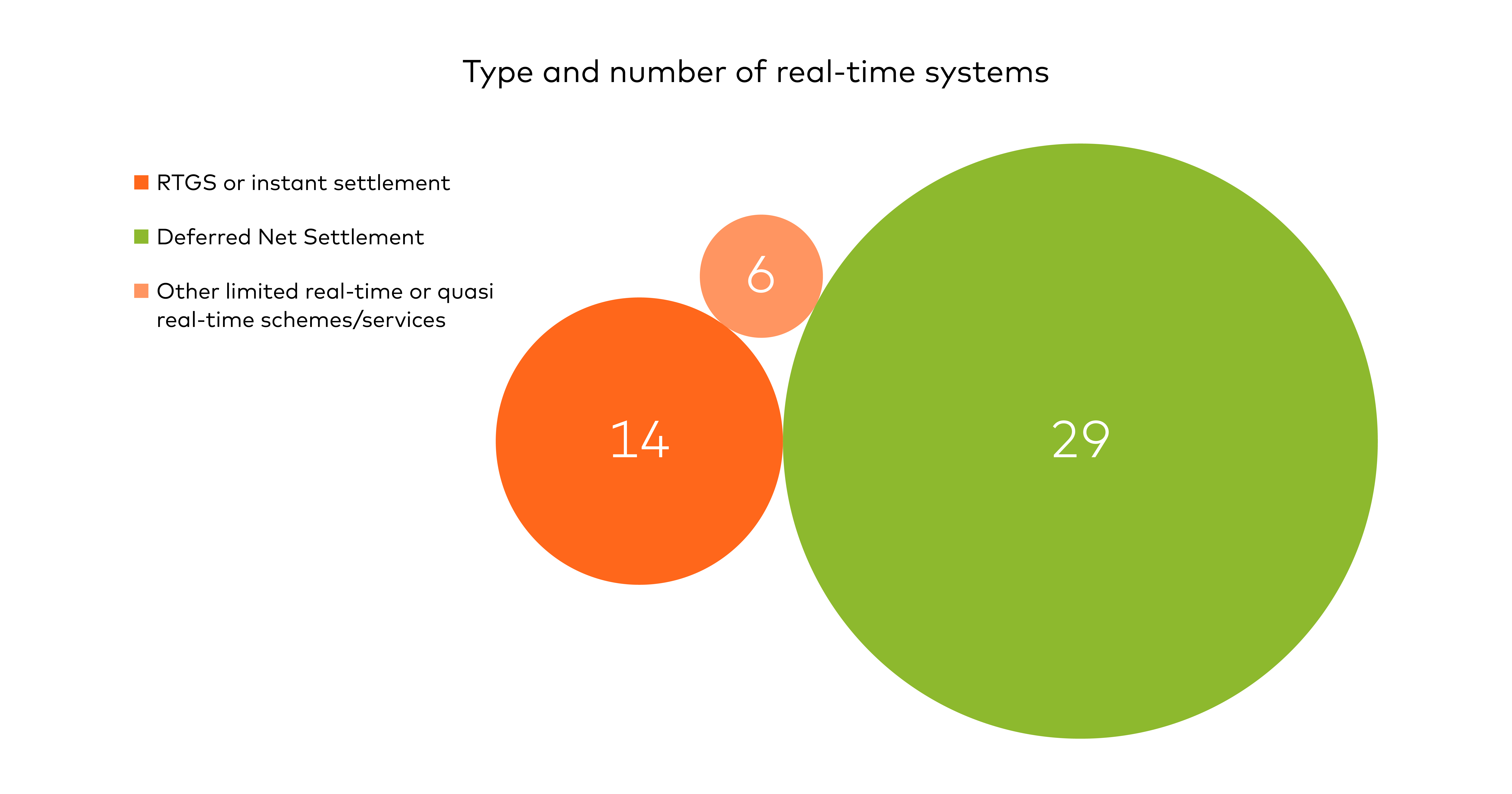 The majority of real-time payment systems are based on deferred net settlement, which means that posting of the transaction happens within just a few seconds, but settlement happens later (typically multiple times throughout the day). Around 60 percent of services we tracked fall into this category and include the likes of the UK’s Faster Payments, Thailand’s PromptPay, and India’s Immediate Payment Service (IMPS). The other main type, which include Mexico’s SPEI, Australia’s New Payments Platform and Sweden’s BiR are instant settlement systems. This means the payment is both posted and settled in near real-time. We’ve also tracked a number of other services, which didn’t quite fall into the categories above or in some cases offered limited service, but nevertheless from an end users perspective delivered a real-time payments experience.[1] 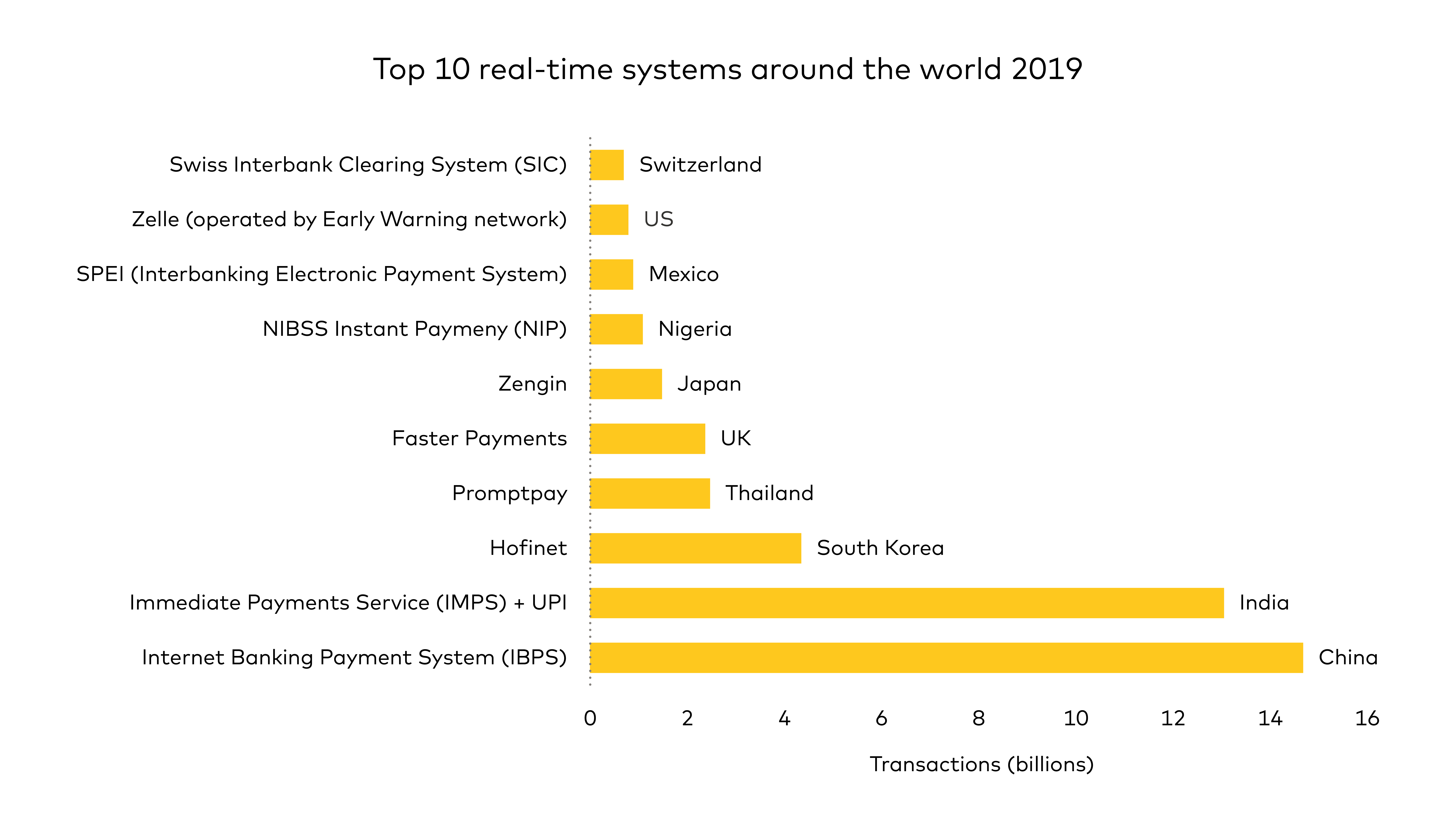 An early driver for PromptPay was the government’s decision to move its disbursements to the service. This encouraged adoption from the outset as Thai citizens had a clear financial incentive to sign up in order to prevent any delays from receiving key government payments, such as welfare, subsidies and pensions. This push from the government solved one of the great difficulties faced by all new payment systems – how to create a critical mass of users.

Alongside market-wide support from banks, it laid the foundation for the growth of other use cases. With the majority of people in Thailand having signed up for PromptPay, it became a great vehicle for supporting digital P2P payments aided by a multi-proxy look-up service. This allows users to make a payment using simply the recipients national ID, mobile phone numbers or email addresses. PromptPay is now used for a wide variety of transactions including merchant payments (supporting QR code transfers), business and bill payments. It also offers request to pay functionality through its popular PayAlert service.

"Security, convenience, coupled with the elimination of interbank transaction fees has resulted in an explosion of growth."
Chavamon Vinijtrongjit, head of Bancassurance products at TMB Bank

According to Chavamon Vinijtrongjit, head of Bancassurance products at TMB Bank, PromptPay opened up a new payment space in Thailand. While most Thai consumers had access to digital banking, usage was low and there was an apparent lack of trust in the service: “The arrival of real-time payments changed this mindset as the certainty that the payment will arrive immediately alongside industry-wide collaboration in setting a transparent dispute process removed much of the fear of using digital payments. Security, convenience, coupled with the elimination of interbank transaction fees has resulted in an explosion of growth.”

So where next for Thailand? Mass transit has been touted as a piece in the jigsaw that could take Thailand to the next level of real-time payments maturity. Whether this happens or not, as we have seen in other parts of the world, tackling high frequency everyday payments is a major contributor to digital payments growth and could be a key component in bringing Thailand ever closer to a cashless society.

Not all payments are equal
One of the fascinating elements of tracking these different systems is how different markets use real-time payments – whether it is to solve a specific pain point, grow financial inclusion, drive digital payments or innovate. Therefore, measuring markets by the number of transactions does not tell the whole story in terms of the role real-time payments play in an economy. In some markets, such as Sweden and Denmark, real-time payments are primarily used as a cash-replacement mobile person-to-person payment solution generating a high volume of low value payments. In other markets, such as Switzerland, it represents the country’s primary interbank payment system. In the UK, Faster Payments supports a range of use cases (and new payment flows), including retail payments, business-to-business payments and disbursements but it also works alongside and largely complements the country’s Bacs batch system used for non-time sensitive payments.

However different markets currently utilise real-time payments – as the Thailand example shows – new use cases are developing all the time. Even as we navigate these uncertain times, our expectation is we will continue to evolve and deepen out usage of real-time payments, supporting sustained and continuous strong growth in the years to come.

This article was updated in November 2020 to reflect updated reporting and availability of historical data sets. It previously stated 80% growth in 2019.